Holy Cows of cows this episode was painful to make, but we’re finally here. This episode corrupted not once, not twice, but three times and I had to start over from backups that were not up to date, so I technically made this episode a few times over. Despite all that I’m glad we’ve made it near the end.

There’s only one thing I can say and if you’ve been following the show from beginning to now, there’s a plot twist in this episode that I don’t spell out, but I’m hoping you figure it all out on your own.

The Immortality of Daphnes

The Immortality of Daphnes

Are you watching closely?

This is kinda my apology for the next episode taking so long. I actually started working on this at the beginning of the year and I’ve been saving it for story purposes. I’m sorry Episode 30 isn’t out yet…still working on that.

This is the last planned comic for Seven Dark Sorcerers. I hope this is a good substitute until the last bits of the story are revealed.

Incase you’re not sure, this story takes place before Tragedy of Eclipso. Hope you enjoy.

Time to wrap it up…

Over the past few weeks I’ve been thinking a lot about the structure of Seven Dark Sorcerers and I realized that I had written the last parts to be in an episodic format which was natural because this is an episodic show. However the more I thought about it the more I realized that it does not have to span a few more episodes…I wrote a few of the last episodes to build more development with the characters and to get emotions out of them as they learned of the secrets like the last reveal for example. My birthday was a few days ago and I’ve been struggling a lot on my priorities with my writing or my animating and I cannot do both and put out a great product.

What I’m getting at here is I had said that Dark Sorcerers would end at Episode 35…And I’ve changed that now…It’ll end at Episode 31. “But Spike, how can you do that?” you ask. My reply is it’ll be a special finale episode. It’ll be about as long as two episodes (30 to 40 minutes) and it will take longer than a few months to come out. As you would guess since it’s shorter than 5 put together that means I cut a lot from the finale, and yes I have. The last episode will have most of what Episode 31 was already going be plus tiny bits from 32, 33, 34 and most of 35.

Episode 32 and 33 were the ones that were more dialogue heavy and focused on emotions…well that’s gone. I think at this point there’s no reason for that, and while I did like the moments for the characters that I wrote…I don’t know it just doesn’t feel necessary to me. I know with this change there’s a possibility that some quality will be lost…You know I’m just hoping the end will be well received after all the build up to this point. At first I was thinking of ending after the next episode because I literally can’t do 5 more, but I decided instead to do one last large episode because I really do like this show and it would be a shame if it was left on a cliffhanger.

Sadly it is just time to wrap it all up. I feel that Dark Sorcerers is a fun show, I don’t want to give up on it, I feel like I’ve asked too much of the voice actors who have still gone from 2009 to 2015 voicing all these characters with no pay, and I’m not sure why they have stuck with me and it’s at the point now where I can’t keep asking them to do this for another year or two.

I know you’re probably thinking this is not a good idea, and I understand, and I’ve talked to my friends who watch the show and they told me I rather not do that. I really do think it is time to give the show a great ending, I do really like the ending and it will have some cool fights and a good climax and epilogue. I think the cut segments would make it a little stronger but not by too much. There’s a lot of responsibility on my shoulders and not just for the reasons I’ve had, but the fact that this show will have to stand the test of time. It was never my place to give the internet a serious Zelda animated show, it should have been Nintendo, but this will have to do until they finally make one…….when I’m 60 years old I presume.

Zant is here to play.

Hallelujuiuuuieja! Episode 29 is here! ….I apologize in advance!

I still have to work on a few things regarding part 2. Part 2 is where the awesome things happen so stay tuned for that. Also I have a few new voice actors on board for the show: Kristin, FruitFly, and SalemKillsKittens have joined the crew and they all did a terrific job!
Hope you enjoy! I’m very tried. Expect part 2 this weekend.

Feels like I haven’t updated in awhile, so I should probably let you know what’s going on. I went to the doctor about two weeks ago and my doctor told me that she noticed my Blood Pressure had been consistently high most of my visits, and she asked me to document my results for two weeks, so I did, and then she told me that my blood pressure was too high, so she put me on a blood pressure medicine, and I got back a few hours ago from doing an EKG and I had blood drawn to check things like my cholesterol. I’m on a different diet now that consists of turkey and chicken sandwiches. I use to eat fast food everyday for lunch and sometimes dinner, now I have maybe 1 fast food lunch a week. I’m walking a lot more, about a mile a day, and I’m trying really hard to keep myself healthy.

This was a lot for me to take in as I had been very care-free about my lifestyle before…sadly I can’t ignore this stuff anymore. It’s been a very tough few weeks as before this I was having awful sinus pain in my head and teeth and it’s still lingering now and it feels like it’s not going away. So I’ve been sick, health obsessive, just a lot going on right now.

Well obviously I can’t get the episode out this month. When will it come out? I’m not sure. My voice actors have also been sick and busy with work, so the only thing I can do is work on Episode 30 so it can come out sooner.

Thanks for your patience and understanding.

On February 28th I’m going to do a clean up of old user accounts. If you haven’t logged in to zeldalinkedgreen.com in the past year, I’m going to click a button that deletes your account, and if you see this too late then your welcome to create a new account.

The reason for this is I’ve been getting flooded with new users recently and I’m doubtful they’re real accounts. I’m guessing their bots that just register and it just takes up space on the database.

I’m going to try to get this out in February sometime. Stay tuned! =3

Last update for the year.

Things are winding down for the year so I thought I’d share some of my thoughts about 2014. I’d call this year a pretty good success as we released Episode 26, 27, 28, and finally brought a close to the Tragedy of Eclipso. Also as a bonus…maybe?…I released a new game called Cyber Zelda……… So there was that.

I’m very happy with what we got out, we got to see some epic battles with Rigalo and Onox, and Young Link and Vaati, and one of the moments that was special with Young Link being able to transform again.

I think the main reason I’m writing this is to tell you that I don’t have anything else to really show for the end of the year. I had thought about making a trailer, but it would be a boring trailer as I don’t want any spoilers so…I don’t know.

I’m shooting for Episode 29 to be released sometime in February, and right now progress on the episode isn’t great. I’ll have more motivation in January to get it rolling. Also I’ve concluded there will be 35 episodes total, and I’m hoping maybe next year we’ll get as close as we can to finishing the year with Episode 32.

I also want to tell you that there’s something I really need to be doing instead of the show, and I feel like I made a point to work on it this year and I didn’t… But that has to change because there’s no excuse for me not to get some of my written works published. I have a lot of stories I want to write and writing is difficult, it takes time, and I should have been writing years ago instead of animating……..I’m almost 30 and still making Zelda cartoons. What am I doing? xD I’m kidding.

The secret project I’ve talked about before is looking less and less like a reality, even though it’s something I’m overly obsessed with and too passionate about. I mentioned it would be a collaborative effort, which is a double edged sword, on one hand it would be great if it really happened, on the other it would take so much time it’s unfair to ask others to put their personal projects on hold to help me with it. It would be the same as asking someone to drop everything their doing to not get paid to work on it, which is insane. I’ve thought about Kickstarter and Pateron to pay them for their hard work, but that’s only an option if I’m 100% positive this will be a reality, and it’s more like a 2% chance.

That’s all I have to say. I want to wish everyone a Happy Holidays and a Happy New Year! Thank you for still watching and supporting the show, and I want to thank the voice actors for putting up with me.

Thank you and have a good rest of the year. 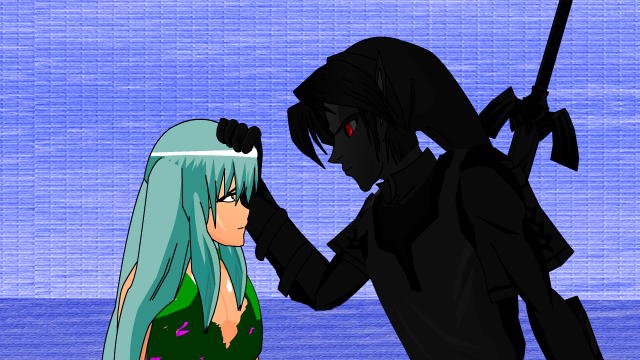 After Episode 28, as you might have guessed, Episode 29’s pace will slow down a little. I’m not sure what all I can say about this episode without it being a spoiler, but I’ll try.